This Is the Tough Part

Jesus Christ was a man.  Fully human.  He was also fully divine.  (Catechism of the Catholic Church paragraph 470).  Unfortunately, as we approach the Triduum (Holy Thursday, Good Friday and Holy Saturday), we don't want to think too much about that human side of Jesus.  Yes, he suffered and all, but he is God, so how hard could it be for him?  Better yet, I don't want to think too much about that suffering part.  It's bad enough he had to die, can't we just get on to the Alleluias and Easter candy?

At the risk of being labeled an Arian heretic, I like to think about Jesus' human nature and how hard the Passion was for him.  I'm not talking about "The Passion of the Christ."  I know Jesus' passion was very violent and physically painful (really torture), but what about the mental anguish?  He clearly had second thoughts about dying the way he did:  "My Father, if it is possible, let this cup pass from me."  Matthew 26:39.  Jesus was not running from the ordeal he would suffer, ("Take this cup away from me, but not what I will but what you will." Mark 14:36), but the Gospels are unified and very clear that he was distressed: "He was in such agony and he prayed so fervently that his sweat became like drops of blood falling on the ground." Luke 22:44.  He wished it could be different; he was distressed; he was afraid for his disciples: "Get up and pray you may not undergo the test." Matthew 26:41.  Clearly, this could have gone another way.  Was he afraid?  Did he think there could be a different path before he accepted the Father's plan?  My heart breaks that he went through all that anguish for me. 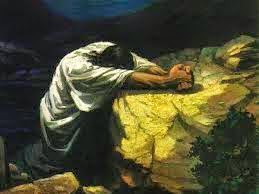 That's the Jesus I think of during Holy Week - the man who was mentally tortured about how his death would go down and the fallout for his disciples. I also think about the same God who "so loved the world that he gave his only Son, so that everyone who believes in him may have eternal life."  John 3:16.

Would you watch one hour with Him?

cc
Posted by Pretty Home Threads at 12:31 AM No comments: